skip to main | skip to sidebar

The quick up date is...
Sunday, Monday were both great days. Flights as long as 3 hours were flown. Today was a bust for flying but we had a fantastic picnic and hike in the redwoods. Stupid football was played. (That's, throw the ball left handed with your eyes closed... Well you had to be there.)

See ya get some pictures up next time.

OK,
As your poor paragliding Instructor, it was a little weird going to pick up PV after he flew his private plane into Monterey. The kind of thing that starts one of those, “What have I done with my life.” thing. Be kind of nice to have my own plane, you know. Little did I know...
PV said he had a friend that wanted to go on a tandem flight. We waited around at the parking spot for him. When he does come, it’s in a Ferrari. So I showed him my home made evaporative cooler and said, if he wanted, I could bungy it to the dash of his Ferrari, cause I could always make another. So Ferrari driving dude and his gal come out to the beach and we have a great day, flying the tandem with them. I was now thinking, “It would be kind of cool to have a Ferrari.” ( Or more accurately, It would be great to, 1. have the money to buy a Ferrari, or 2. Have so much money that I WOULD actually buy a Ferrari)

We wrapped up the day with a few hours of flying. The new folks were psyched to fly. But, at 4:30 the gal needed to go off to the airport. There we met another former Microsoft guy, (who lends God money). She got in his twin engine $600,000 plane and flew off. At this point I’m thinking... What the fuck! And to think that just yesterday I was a little envious of PV’s plane. (Which, now, as compared with the twin engine plane, was looking like my car as compared to the Ferrari.)

Anyway, If I did have too much money I probably won’t be hanging out with all my paragliding buddies this week, which would be my loss.
Posted by Bill at 7:51 AM No comments:

PV and I flying

Just a quick note.
Picked up PV at the airport. (He flew his own plane there) Went to the beach and got an hour of flying in. Strong winds, fat lift band and sunshine. Perfect, if you can beach launch. There was at least another hours of flying to be had but we worked a lot of those beach launches. SO, we warmed up the site for all of you and it should be ready when you arrive.
Posted by Bill at 9:45 PM No comments: 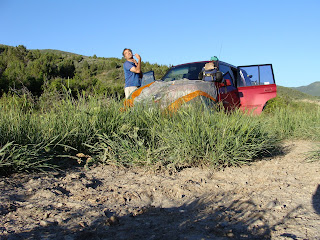 If you drew a straight line from my house to Dad and Barb’s, (Where we will be camping out) the distance would be 927 miles. I will drive over thirteen hundred to get there. It’s funny to watch the GPS, which gives me that straight line distance, and the odometer count down the miles from their differing references.
In my first half hour I managed to drive twenty seven miles while getting five miles further away from my goal. A bit discouraging that. At other times the arrow on the GPS would point right down the road and they would click off miles together. At other times the arrow would point off way right or left and as the odometer tumbled along the GPS would stubbornly sit there.

It’s time for the annual fourth of July ridge soaring clinic. This will the ninth year in a row that it’s been held. That we’ve come back nine years running is proof enough that this is a great place and a great time to fly.

I’ve done this drive many times. I started out going balls out, trying to get the drive over with. But the flaming eyeball feeling of too many hours on the road changed me over time. I settle on a three day trip in the end. There is now a routine of sorts but a pleasant one. A sandwich in Vale, a bike or skate along the Colorado river in Glenwood canyon, skipping rocks at the secret rock skipping place. There is no point is blasting through all these amazing places. I’m now camped out in one of my dirt bag camping sites along the road. There is a stream and it’s running hard with the snow’s run off. The highway is far off, though a slight rumble of the trucks can still be heard.

Tomorrow with be Salt lake city, the salt flats and lots and lots of Nevada.

Day Two,
About half way through day two, somewhere around Elko, the road trip looses it’s sparkle. The big mountains are gone, salt flats were an interesting change as you leave Utah, then you hit Nevada. And for a while this olive green terrain, with it’s dusty black teeth of rock is interesting also. But there is four hundred miles of it. I run playlist after playlist of music on the Ipod, then switch to book on bytes.

The heat of the day slowly ramps up but, amazingly, my homemade evaporative cooler keeps the car to, just, the warm side of neutral. My new car has no air conditioning, So, out a plastic box, a fan and wick from a humidifier I built one. It is a god awful looking contraption that I’ve bungy corded to my dashboard. What still amazes me is that it works. At 70 degrees it’s cool. a little less cool at 80. By 90 degrees it’s warm but far from that, “ I’m a pizza in an oven” feeling that you get from no air conditioning at all.

The orange cone migration is in full swing. It’s a little late in coming this year (with all the last season snows) but, finally, the orange cones are starting to leave the lower winter grazing grounds and move to their high summer pastures.

These endothermic creatures love the heat of black asphalt. You can see them for miles lined up on the interstate. Sometimes they line the edges of the road, sometimes they come straight down the middle forcing the traffic down to one lane. Legions of federal wildlife workers help manage the migration. Dressed is camouflage orange vests they wield orange diamond shaped signs directing the cones along. There are the petite females, the classic cone shape, and the big bull barrel males. Sadly, I saw few conelings. (probably yet another effect of global climate change.) It’s hard sometimes to not become annoyed at the pitiful slow progress of the cone migration, and yet we need to learn to share this world of ours. Thankfully their social structure assures that they only travel in single file, if not the road would be impassable most of the year.

Tonight I’ve packed into Donner pass. (Never gone back packing with computer before.) The bugs are swarming. (and I’m a Wisconsin boy so I know swarming.) Never camped here before. Tomorrow is the last part of the big drive I could be soaring beach by 2:00 if all goes according to plan. Coyotes howl, time to sleep.
Posted by Bill at 6:08 PM 1 comment: